Eleven ringers came to today’s Ringing up and down course at Bletchingdon, with five students and six helpers, giving us scope to form strong teams around our students as well as standers for those in the band.

We started in teams of four, with Christine, Ala Sue, David and Judith getting practice raising and lowering following an experienced ringer.
We had a strong band of helpers, including Emma and Laurence, Celia, Alison and Hugh, some of whom stood with our students and explained in helpful ways.

We also took refreshments of tea, coffee, squash, homemade cake and biscuits, thank you to Sue, Hugh and Judith for providing these.

We built up to ringing five and six in peal, with all our students making real progress, whether keeping in time with the other ringers or gaining insights on handling tips and techniques.

Our helpers also got a chance to ring a plain course of Cambridge Minor before the final lower and obligatory team photo.

A really productive practice, with everyone making good progress. A big thank you to our superb helpers and to Sue for hosting us again!

I guess we’ll need to hold another such practice later this year for those who couldn’t come to today’s session.

We rang several plain courses of Grandsire for Gerald, Mandy, Ala, Sue C and Sue M, who also got to ring 5 observation to Grandsire, while Graham rang inside affected on 4.

We were indebted to Laurence and Emma for standing with our less experienced ringers. We also rang a touch of Grandsire for Judith and Teresa affected and a touch of Plain Bob doubles for Ala, as well as a couple of plain courses of St Simons, which was first blows for Emma and Laurence.

At the end we did a nice lower on six ending in Queens, including Judith and Graham. A great turnout to a really good practice.

Also to note that our next Branch Practice is a week on Friday 4th February at Ludgershall. See you then!

It was great to welcome fourteen ringers representing five towers to the 2020 Christmas social tonight, including very welcome returns from two of our dispersed ringers Helen and Ellie.

Notable welcomes also to Kathryn and Barbara Summers with their canine companions Dilly and Rufus who joined us specially for this occasion, also that Sally from Islip was able to participate in the video chat and Ringing Room for the whole session.

After some Carol melodies in Ringing Room we split into four teams representing Bletchingdon, Weston, Islip and Kirtlington for a quiz in four rounds featuring a range of bellringing and seasonal questions, as well as a Christmas music round.

The result was closely contested between Islip (8 points) and Kirtlington (9 points) with Bletchingdon (7 points) a close third and Weston a bit further back.

Finally we returned to ringing room and rang some rounds on 12 followed by carol melodies and a brave attempt at a multi part version of O Come All Ye Faithful. Rufus gave a very touching accompaniment of his own.

A very Merry Christmas and Happy New Year to everyone. Our next practice of 2021 will be at 8pm on Monday 4th January. Hope to see you then.

A very successful Focussed Practice this afternoon with a strong band of helpers to support five of our regular ringers progress in trebling and inside to doubles and minor methods.

Sue M rang 3rd inside to plain courses of Grandsire Doubles, then trebled to a touch of St Simons bob doubles.

Gus rang treble to a touch of Plain Bob Doubles, then to plain courses of Bob Minor, for the first time. Well done, Gus.

Judith rang inside to touches of Grandsire doubles, practicing different work bobs and singles at and near lead.

Charlie rang inside to different touches of Grandsire Doubles, in the end without a stander (not needed), and also trebled to a plain course of Cambridge Surprise Minor, for the benefit of Benjamin.

I think everyone got a “prime ring” and will have gained confidence in their chosen work.

Our helpers were rewarded with tea, coffee and cake, brought by the students, and was much appreciated.

I hope to arrange a further session on 1st March, more focussed on Plain Hunt and trebling to doubles. Watch this space! 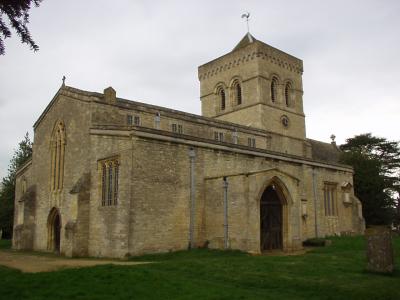 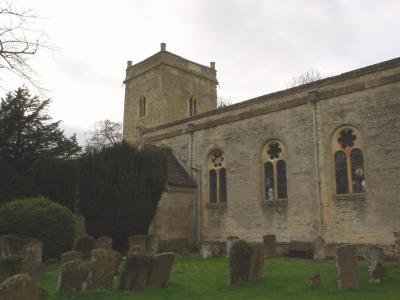 Seven ringers attended this month’s special practice at Weston, including a very welcome appearance by Tony Crabtree, visiting the tower to advise on planned improvements to the ring of bells.

Proceedings were led by Jeremy Adams with support from Teresa Carter and Faye. The local Weston ringers were in attendance of course, and the ringing menu was structured around them: being Plain Hunt on 5 and plain courses of Grandsire.

We also had Barbara, a potential new recruit from Weston, come to see what ringing was about and who had a try at backstroke. She was not put off by the experience!
Our next practice is on 5th December at Charlton on Otmoor. Hope to see lots of you there! 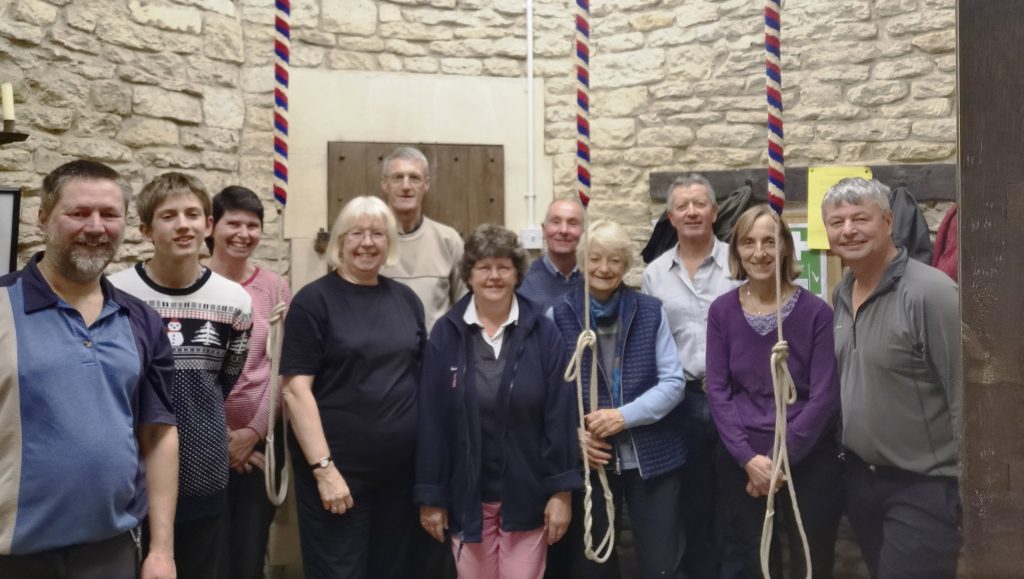 A special set of seven ringers attended tonight’s Special practice at Kirtlington, somewhat fewer than the multitude that descended on Launton at the beginning of July. Perhaps partly due to the fact that this practice had been re-scheduled from its original date of Monday 15th July. We were very grateful for the strong Ludgershall presence of three ringers, including Richard, our joint ringing master.

After ringing up and eschewing Stedman, we aborted an attempt at St Simon’s Bob Doubles, then went for our first touch of Grandsire Doubles, with Judith ringing 5 observation, then the first plain course of Kent Minor, Fay on Treble, Jan, Andy and Kathryn inside.

Next up we rang Plain Bob Minor, Judith having her first go at treble, assisted by Kathryn.

After 120 touch of Grandsire Doubles, Judith on 5, we rang some more Kent Minor, then a much better struck touch of Plain Bob Minor and even some plain courses of Little Bob Minor, Judith trebling, before we rang down in peal.

A very nice practice, with  quality  rope time for most.

Next Branch practice is on Friday 2nd August at Caversfield. See you then. 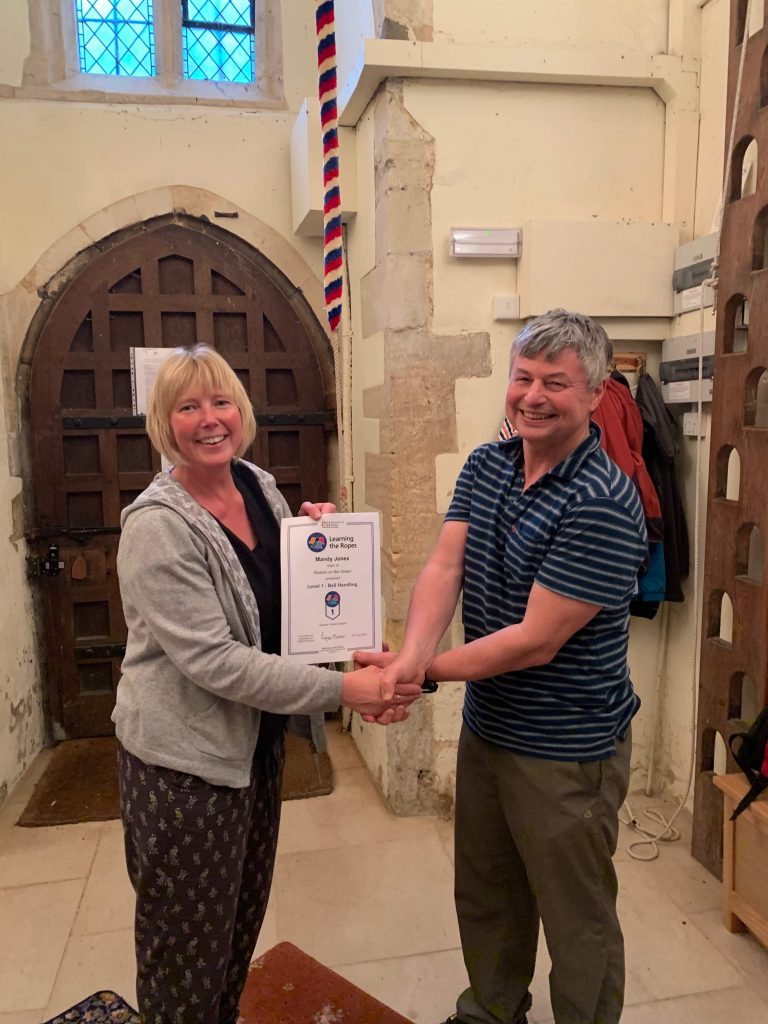 Eleven ringers from seven towers came to last night’s special practice at Bletchingdon, with Plain Hunt and Grandsire Doubles on the agenda.
We kicked off with Plain Hunt on 5 for Mandy, Gus and Andy, helped by Jeremy, Judith, Sue, Rosemarie, Anne and Fay.
Next we tried Churchyard Bob with Sally on Treble, giving a gentle introduction to hunting over all the heavier bells in turn.

Turning to Grandsire, we rang a 120 Change touch with Judith, Fay and Anne inside and also some plain courses with Sue on 3 and Rosemarie on 5.

We had Sally in again ringing treble to Plain Hunt on 5, Judith helping, which was her best effort to-date, making great progress. I think Sally was quite pleased afterwards. Well done, Sally!

During a break in Ringing we presented Mandy and Rosemarie with their ART LtR Level 1 and 3 certificates, respectively, and Rosemarie received a card and mounted photos of favourite towers and ringing moments, as she will be sadly leaving us for Germany shortly.

Back to Grandsire, another first was achieved, this time Andy trebling with increasing confidence to some plain courses. Well done to Andy.

Gus was inside again, consolidating no. 3 to Plain Hunt.

Finally, we rang a different 120 Change touch of Grandsire, showing Rosemarie work at bobs and singles, before ringing down.

A really good practice. Well done to all and thank you to Jeremy, Fay and Anne for leading and helping us. 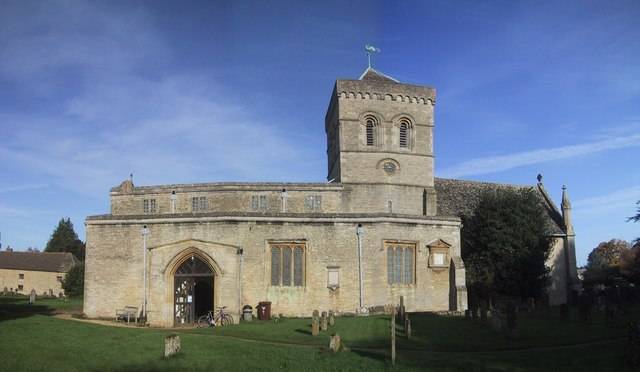 Ten ringers came to last night’s Branch Practice at Kirtlington, led by Richard, joint ringing master.
Before we started the main practice, Mandy from Weston came for some ringing up and down practice, helped by Andy.

In the main session, we rang call changes on 8 bells, followed by plain courses of Grandsire Doubles, Sue , Judith and Anne inside, helped by Jan, Kathryn and Katie Lane, Guild Master, making a very welcome appearance.

Next up another touch of Grandsire Doubles, with Judith affected inside and Charlie on covering tenor.

We then gave Charlie a go ringing 3 inside to plain courses of Bob Doubles, doing very well.
For Sue we rang a touch of Grandsire Doubles, observation, Judith trebling, followed by Plain Hunt on 7 then Bob Minor with Charlie trebling and Bastow Little Court Minor, where we brought Sally into the team.

Finally we rang some nice rounds on 8 before ringing down sort of in peal.

A very nice practice. Thank you all. Two upcoming events to note are ringing before and after the Lamb Ale service at Kirtlington from 10 am on 16th June – all welcome – and also Special Practice at Bletchingdon on 19th June. Hope to see lots of you there.