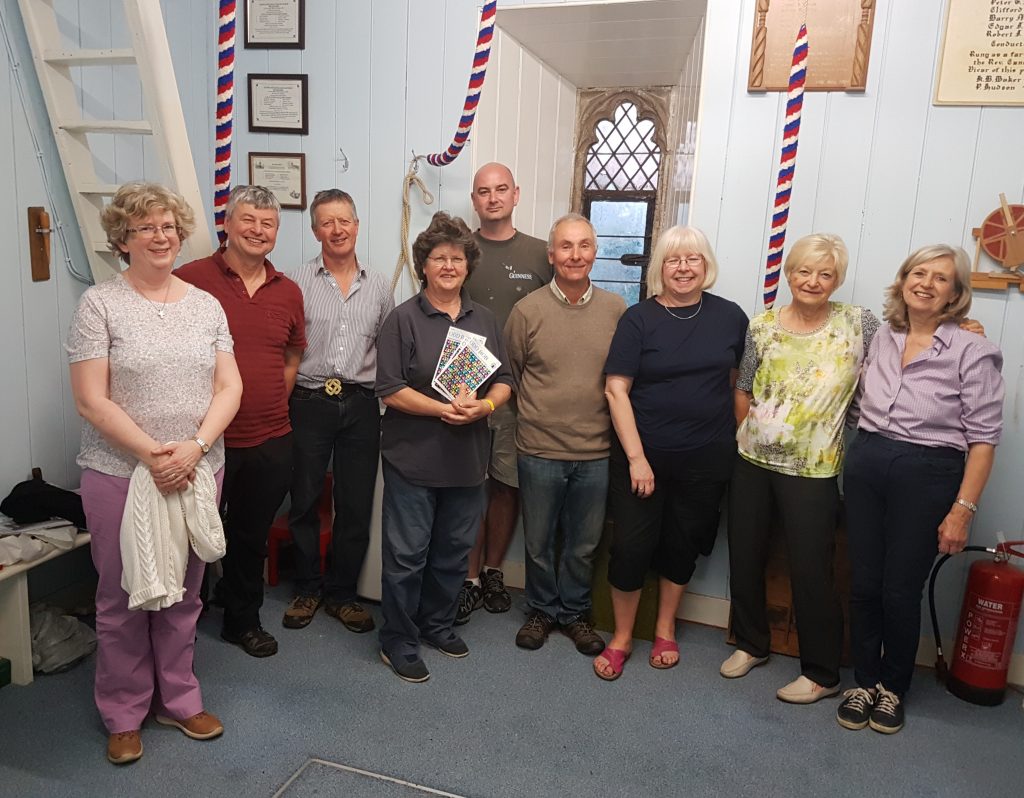 we were also joined by Keith, Sally, Sue, Ricky and Roffa, who joined in ringing rounds and call changes on 8.

The band managed a number of reasonably struck touches of Bob Minor and Reverse Canterbury, called by Richard, with the highlight of the evening being a nicely struck touch of “Clifford’s Pleasure” (Reverse Canterbury with Grandsire Singles) chosen by Jan, with Jan’s father who often rang this, in a photo looking over the proceedings. It would be nice to imagine him approving of the band’s efforts.

Next Branch Practice is at Bletchingdon, on Wednesday 7th November, before the big Ringing Remembers weekend of 11th November.

There was a good turnout of thirteen ringers at Monday’s Special Practice at Kirtlington, including Judith and Tim who rang some good touches of Plain Bob Doubles, Tim on observation bell.

It was good to welcome James, Hugh, Judy and Benjamin, from Marston, Ron, Jeremy, Kathryn, Sally Wale and Freddie.

After an attempted short touch of Bob Minor we rang some Plain Hunt on 7, before ringing down.

14 ringers from 6 towers came to Tuesday night’s special practice at Islip – we were delighted to see the perpetually youthful Louise Brown who was such a stalwart welcome visitor for many years.

Although we were missing 5 other Islip ringers, we had 4 of our most recent #RingingRemembers learners who might have felt overwhelmed by the attempts of the more established to ring the designated method of Kent Treble Bob Minor (slightly more successfully on the 2nd attempt) but all are making steady progress. Without our learners we won’t, in the future, be able to ring Grandsire and Bob Triples – both of which we managed for the first time for ages under the direction of both Ringing and Deputy Ringing Masters!  So something for everyone – even if not enough time for all!

Two upcoming events are Branch Practice on 3 August at Ludgershall and the Striking competition at Islip on 1st September. Hope to see lots of you then.

12 ringers from 8 different towers within the Bicester Branch (i.e. members from 50% of all towers) came to the Special Practice on Monday at Bicester. The methods specified for the evening were Little Bob Minor and Grandsire Triples.

We started by ringing call changes on all 10 bells, and then Grandsire Triples, Plain Bob Minor plus ringing Plain Bob Major – congratulations especially to Ellie, from Kirtlington, who got through a plain course with some expert help from other ringers including Richard Haseldine, who managed to keep about three bells right at the same time!

It was good to see Sue, from Wotton, who rang plain hunt on 5 with increasing confidence.

The next Branch Practice is on Wednesday 6 June at Middleton Stoney – do come along if you can. The range of expertise is considerable which makes it all the more rewarding and interesting. 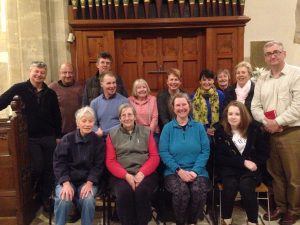 A really big thank you to all the helpers from four different branches who came to the focused practice at Bletchingdon this afternoon,organised and run by Alison Merryweather-Clarke.

This really benefitted six students, including Judith Vickars, Ellie Seddon, Sue Macready, Sue Carter, Immi  (having just completed a Quarter Peal) and myself, who often wouldn’t get the chance to practice their favoured method with a such strong band.
The reward for the helpers was a selection of cakes, brownies and biscuits (baked by the students ) with cups of tea and coffee.

Sue C consolidated her ringing of Plain Hunt Doubles and tried different bells.
Sue M rang a few plain courses of Plain Bob Doubles, and then completed a couple of touches unaffected on 3.
Judith rang two unaffected touches of PBD on 3, then progressed to a 60 blow touch. Well done!
Immi rang some touches affected of Plain bob Doubles, trebled to Bob Minor then inside to a touch of bob Minor.
Ellie rang a number of different touches of Bob Minor.

Also a big thank you to Jane from Iffley, who stood with several students and gave very helpful guidance during the touches.

Several helpers and students commented afterwards on how valuable this session was.

13 ringers from 7 towers and 3 branches attended last night’s Special Practice at Bletchingdon. First up, we concluded Rory’s handling session with him ringing rounds and call changes in the team. Well done Rory.

After a touch of Grandsire involving Ann, Jan, Jeremy, covered by Brenda and called by Richard, we attempted a touch of Plain Bob Minor, but unfortunately weren’t quite strong enough.

With Brenda, Derek, Ernie and Rosemarie in the band we rang Kaleidoscope Mexican Wave, each dodging with the neighbouring bell.

Finally we rang a few plain courses of Bob Doubles with Sue and Judith inside, as well as another few courses of Grandsire for Jean, Hilary and Tim.

Next Branch Practice is at Stratton Audley on 4th April. Hope to see lots of you there.

13 ringers from six towers headed over to Bicester to join in last night’s special practice. Oxford Branch was also represented by Ron and Derek. The practice was ably led by Steve Walker and Jeremy Adams.

We rang rounds and call changes for a few times on 8 and 10 bells, giving a long overdue and welcome airing of the full Bicester ring as well as giving Gus and Derek the opportunity to develop a rhythm on unfamiliar bells. Both got well into the swing of things by the end.

For Helen, Sue, Ellie and Judith  we rang several courses of Plain Hunt on 7, improving each time and also 3 touches of Plain Bob Doubles, in preparation for the ladies’ QPA next month. In this we were helped by Steve, Jeremy, Simon (returning after a while away from ringing), Ron and Ian.

After a touch of Grandsire Doubles, Ellie trebling, we rang down the front 4 then the back 6 in Peal, finishing in Queens. A very worthwhile practice.

Hope to see lots of you at the next Branch Practice, at Kirtlington on 5th February. Perhaps a chance to see the new simulator in action?

There was a great turnout to Monday’s Branch Christmas special Practice. So good to see our regulars plus Ian and Helen from Bicester, Kathryn Grant and Sue from Islip, Roy, our latest group member and U.S. correspondent as well as Richard, Jan, Jeremy, Ron, Jane, Derek, Tim and Brenda. Some 20 ringers all told.

We rang call changes on 8 for Derek, Sue, Caroline, Judith and Louise, Plain Hunt on 5, 7 (for Roy, Caroline, Louise, Judith and Brenda) and 8 for Helen.
There was a nicely struck touch of Plain Bob Minor, Ian on 2 observation, called by Richard, Grandsire Triples and a touch of Grandsire Doubles, with Sue Macready on 5 observation bell.
Finally a short burst alternating between rounds and Queens, before we rang down sort of in Peal, at which point Gareth Miller, Kirtlington rector, joined us as we took some photos and headed back to Caroline‘s for a wonderful apres bell Social (big thank you to Caroline and Louise for hosting, organising and providing mulled wine, and to everyone who contributed food), later featuring hand bell ringing. Definitely improved over last year.

See the  Kirtlington and Bletchingdon Facebook group for some video clips  uploaded by our remote location editing team!

Hope to see  lots of you at Islip on 3rd January for the first Branch Practice of 2018.

Have a very Merry Christmas and a Happy New Year!

Having left ex-hurricane Ophelia behind in the Lake District Tuesday morning, I headed over to Tuesday evening’s special practice at Islip. Not having rung for almost a week, I needed my fix of tower bells.

Our branch president, Willie Haynes and I were initially the only non-Islip ringers to join Teresa, Kathryn, Sally and Sue. The practice had Reverse Canterbury doubles and Plain Bob Minor on the agenda, but for Sue we kicked off with Plain hunt on 5, Sue on 3, which was getting pretty steady after a couple of courses. We later did some more Plain Hunt on 5, Sue ringing 2.

By this time we had been joined by Richard and Jan Haseldine, who formally received the branch striking competition shield from Willie, complete with engraved inscription. We then rang a couple of plain courses of Reverse Canterbury, followed by a touch.

As we were strong enough to provide a stander for Sally, we rang a touch of Plain Bob Doubles, Sally ringing 3 affected, called by RIchard, which went pretty well.

Following the agenda, we duly rang Plain Bob Minor, starting with a plain course, followed by a 120 change touch involving 2 singles at 5th and 10th lead ends, called by myself. However, two calling blemishes to report, the first being ‘bob’ corrected to single – thanks to Richard for putting right a couple confused ringers in the band- the second that I forgot to say “that’s all” immediately after the second single, so we had an extra 60 before coming round again.

Finally, we very nearly completed a 120- change touch of Grandsire doubles, Sally ringing 3 observation, supported by Jan, before we rang down in Peal. All in all a good practice.

Hope to see you at the next branch practice at Bletchingdon on 2nd November.