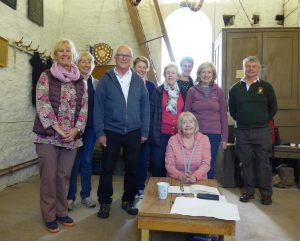 At Saturday’s focussed practice at Kirtlington there were five students from three towers and six helpers, to practice and reinforce methods which are already being learned, but little opportunity to practice regularly.

Judith practiced 4th bell to Grandsire touches including both observation and moving into and out of the Hunt.

Thank you to all our helpers who really made a difference and all the students for bringing tea, coffee and cake.