As expected, there was plenty of ringing going on around the Bicester Branch to help celebrate the Platinum Jubilee weekend between 2nd and 5th June. Below are some highlights.

Teams of five and six turned out to ring out at Caversfield and Bicester on Thursday and Friday morning, to start the Jubilee celebrations. Thanks to Pinder for the photos.

Five ringers joined Sue in celebrating the festive weekend on a sunny Thursday afternoon at Bletchingdon. Thanks to Dave for taking the photos.

On Friday, eleven ringers rang at Islip, including a visitor from Inverness. Several went the extra mile wearing special costumes and hats for the occasion. Photo courtesy of Ricky.

Islip ringers also supported celebratory ringing at nearby towers on Thursday, including at Charlton-on-Otmoor, Weston and Woodeaton.

The team at Weston on-the-Green rang on Thursday evening and before the Sunday morning Jubilee Service. Thanks to Mandy for the photo

On Saturday the sun came out in the afternoon for the Kirtlington Jubilee Picnic. A team of eight ringers from three local towers started off the proceedings, finishing with Mandy’s excellent sloe gin. One of the team, Caroline was also the chief organizer of the picnic. Thanks to Caroline’s friend and David for the photos.

Five ringers started the celebrations at Ludgershall on Friday (photo courtesy of Jan).

Hilary, Linda and Christine rang the three bells at Chesterton  in celebration on Thursday and Sunday.

A team of five turned out on Sunday afternoon to ring the bells at Middleton Stoney, with the no. 2 stay recently repaired, before the afternoon service.

Slightly further afield, one of our ringers called a Quarter Peal of Bob Minor at Woodstock on Friday afternoon and another helped out at Tackley on Saturday.

Held in Weston-on-the-Green, on Saturday 19 February 2022

The Notice, Guild and Branch Report and minutes from last year’s AGM are available below.

Eight ringers from four towers came to tonight’s branch practice at Ambrosden, aiming to make a good noise on a stately ring of eight that sadly isn’t much so rung these days.

After ringing the front six up in peal and ringing some rounds and a few plain courses of Bob doubles with Anne and Sally in we felt we had to get the tenors up and try out all eight, which we did with Dinah in the band, who did very well.

We were joined at the end by Pam, Ambrosden tower correspondent (see photo).

A very enjoyable evening. Look out for an opportunity to ring there for the Christmas Tree festival later this year. Hope to see lots of you at the next practice at Piddington on 27th October!

Big congratulations to Gerald Bushby of Weston on-the-Green for achieving his second Quarter Peal on 7th October 2021, and the first at Weston since the improvements to the ringing chamber and rope circle as well the first there by a member of the team re-formed in 2018.

Many thanks also to Mandy Jones for laying on some wonderful refreshments after the event and taking the team photo. Thanks also to Jeremy, Lesley and Susan for staying on afterwards for some ringing practice with the Weston Team.

The new team at Weston is a real recent success story of a band reforming and there appears to be a prospect of re-starting handling practice for the Weston recruits that started early 2020 just before the Pandemic.

There have been many very favourable comments about the improved ringing facilities at Weston. I hope you get the chance to ring there soon.

A very creditable 13 ringers from five towers came to tonight’s branch practice at Weston-on-the-Green, kindly hosted by Gerald and Andy.

For many it was their first visit since the improvements had been completed to the ringing chamber ceiling and to the rope circle, if not their first visit altogether. It is now a very welcoming space and should be the location for many quarter peals in future.

We are very sorry that Mandy, Jeremy and Richard couldn’t join us, due to needing to self-isolate.

After ringing up we rang some rounds and call changes with Dinah, who is learning at Islip and who appreciated visiting another tower and meeting other ringers.

We rang several plain courses of Grandsire doubles, called by Charlie and Teresa, as well as plain hunt on five, with Andy showing that he hasn’t forgotten how to ring the three to it. Well done Andy.

Some more rounds and call changes for Dinah, then we managed to complete a plain course of Bob Minor at the third attempt, with James on treble and Willie rolling back the years taking two. Kathryn, despite strong reservations, also showed it could be done on four, Teresa on three and Charlie on five.

Finally, we attempted to ring the front five down in peal, where Andy kept behind the treble very nicely. I hope to see more of our Weston friends at Bletchingdon, Islip and Kirtlington in future!

Please don’t forget to put our next branch practice on 29th September at Middleton Stoney in your diaries. See you then!

ART M1 Course at Kirtlington 16th February 2019 On Saturday 16th February, Kirtlington hosted sixteen delegates and three senior members of  the Association of Ringing Teachers (ART), led by tutor Paul Lewis, who attended the teaching of bell handling course M1. Kirtlington was chosen through its proximity to Weston-on-the-Green, where an entirely new team of ringers was trained by instructors from the Oxford Guild (of which just over half had attended ART training) over three months in 2018. The course, sponsored by Oxford Diocesan Guild for guild members, formed part of the concluding activities of the Weston training and was arranged by ODG’s Susan Read and Lesley Belcher from ART, who with Branch Secretary Kathryn Grant co-ordinated the many training sessions at Weston and neighbouring towers. The delegates came from as far afield as Newbury, Milton Keynes and Berkhamstead and also locally from Bladon and Islip, bringing varied, but also substantial ringing and teaching experience. 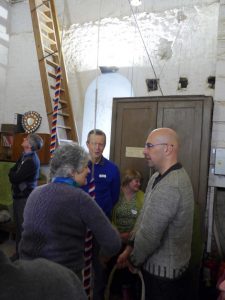 After a welcoming introduction by Katie Lane, ODG Master,  the course combined theory and practical sessions, including how people learn (“learning styles”), how to break down teaching complex handling skills into manageable chunks, what makes a good teacher as well as follow-on activities after the course. The practical sessions introduced teaching handling from bell down, teaching separate strokes, putting the strokes together, raising and lowering, ringing style and how to intervene when needed. The course was well received by all delegates. Tea, coffee, biscuits, cake and lunch were provided and much appreciated. Many thanks to the team who contributed to a successful event! A follow-up assessment event is due to be scheduled for the delegates and their learners in the Autumn, also at Kirtlington. 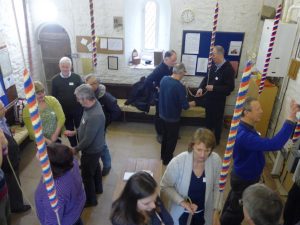 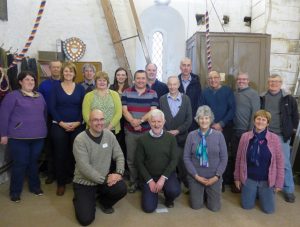 Twenty-two ringers from nine towers and three branches attended tonight’s first Branch Practice of 2019 at Bicester. Officers of Branch and Guild were well represented, with Ringing Master, Deputy Ringing Master and Secretary; we were also honoured to welcome Katie Lane our Guild Ringing Master, as well as Colin, our area Steward plus four other experienced ringers from Adderbury, who are currently having work on their tower.

We started with rounds and call changes on nine, including Gus, Sue, Fay and Chris, followed by Plain Hunt on 7, for Sue and a first for Gus.

With a very capable group of ringers we were able to practice a number of touches of Plain Bob Triples with Kathryn, Ellie, Ian and Jan, a nice touch of Stedman Triples, called by Richard, as well as plain courses of Plain Bob Major and Plain Bob Caters (nine working bells).

For Ann and Ellie we rang a touch of Plain Bob Minor and we also had time to return to Plain Hunt on 7 for Gus, Sue and Anne, before ringing down the back eight in peal.

Sadly this was Ellie’s last Branch Practice with us before she moves up to Yorkshire. Best of luck to you, Ellie! Come back and ring with us again soon!

Next Branch Practice is on Thursday 7th February at Weston on the Green. Hope you can come and support the new band of ringers there.

Happy New Year to you all!

Eight ringers from six towers came to tonight’s Penultimate Branch Practice of 2018 at Charlton on Otmoor, including a warm welcome to Charles and Joyce Morrish from Old North Berks Branch as well as Jeremy our Ringing Master and Teresa. We were also joined by el Presidente Willie Haynes.

We then rang a 100 –  change touch of Bob Doubles with Stephen on four, successfully completing it at the second attempt.

We then rang  a touch of Plain Bob Minor with Ann, Joyce and Jeremy inside, called by Charles, which also went quite well.

Finally we rang a touch of Grandsire Doubles with Gareth ringing half-hunt on 5, your correspondent standing and calling, before we rang down in peal. A pretty good practice with plenty for everyone.

Don’t forget that the final Branch Practice is on 17th December at Kirtlington, including festive food, drink and handbells at a local ringer’s house after the shortened practice. Hope to see lots of you there!

Also please note that places at the teaching handling course at Kirtlington on 16th February are filling up fast, so do get your applications in quickly!