Big congratulations to Gerald Bushby of Weston on-the-Green for achieving his second Quarter Peal on 7th October 2021, and the first at Weston since the improvements to the ringing chamber and rope circle as well the first there by a member of the team re-formed in 2018.

Many thanks also to Mandy Jones for laying on some wonderful refreshments after the event and taking the team photo. Thanks also to Jeremy, Lesley and Susan for staying on afterwards for some ringing practice with the Weston Team.

The new team at Weston is a real recent success story of a band reforming and there appears to be a prospect of re-starting handling practice for the Weston recruits that started early 2020 just before the Pandemic.

There have been many very favourable comments about the improved ringing facilities at Weston. I hope you get the chance to ring there soon.

I was very pleased to be part of the band that rang a Bob minor quarter peal yesterday at Middleton Stoney, most ably conducted by Alison Merryweather-Clarke, with Charlie Bates who returns to Uni this weekend and to whom the quarter is dedicated. Thank you Charlie, for your support this summer, best of luck with your studies and see you at Christmas if not before!

Thanks also to Andrew Goldthorpe, Anthony Williamson and Michael Haynes for making up the team.

This afternoon at Kirtlington, a band completed a very nicely struck Quarter Peal of Grandsire Doubles, rung to celebrate the 32 years of service given by Jean Sambrook to Kirtlington Village Shop. The quarter, conducted expertly by Hugh Deam, was also Charlie Bates’ first inside to the method, supported by Teresa, Kathryn, Paul and Steve.

This was also Charlie’s final practical target for his ART Learning the Ropes Level 5, achieved in less than eighteen months after starting to learn to ring. Very many congratulations, Charlie! 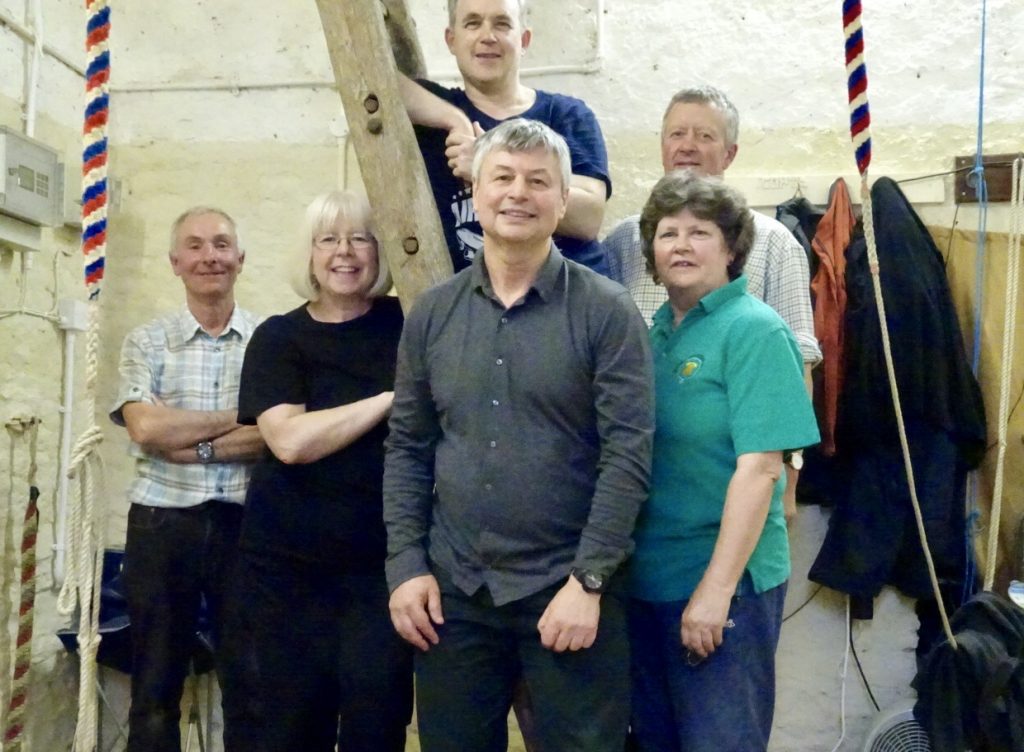 A team of six ringers from our Bicester Branch, including Gareth from Charlton, gathered at Charlton on Otmoor to ring a Quarter Peal of Grandsire Doubles in memory of Stephen Cameron, Tower Captain, who very sadly passed away last month.

Thank you to Kathryn, Jeremy, Teresa, and Gareth for ringing a very nicely struck Quarter and thanks to Richard for conducting so assuredly. Big congratulations to Gareth for steady covering on his first Quarter! The first of many more, I’m sure!

The Bellboard entry is at:

We are most grateful for the assistance of Andrew Goldthorpe, who stepped in at short notice to ring treble.  Jan Haseldine and Michael McArthur made up the band.

It was also a bitter-sweet moment as this was Ellie’s final Branch Quarter Peal before she moves up to York to a new job. Very best wishes to you, Ellie, we will surely miss you!

The bellboard record is at:

Six ringers from Bicester Branch, including our Ringing Master, Deputy Ringing Master, Secretary, Jan and Ellie successfully completed a quarter peal of Plain Bob Minor, conducted by Richard on Thursday evening, at Islip, to celebrate the Christmas period. Congratulations to Kathryn for her first minor quarter inside.

For further details, see the record  on Bellboard at: https://bb.ringingworld.co.uk/view.php?id=1264282

As well as being a Christmas quarter peal, this was also dedicated to Gill and Tony Summerfield’s upcoming 53rd wedding anniversary. Congratulations to them both!

Congratulations to Jan and Richard Haseldine on the arrival of their latest grandson, Edward, for which they have just rung a Quarter Peal at Ludgershall. Congratulations also to Anne Martin, for ringing her first Quarter of Plain Bob Doubles inside.

A very big thank you to Pat and Robert Newton, Neil Ephgrave, Michael and Alison from Witney and Woodstock Branch and Hugh from Oxford City and Kathryn ( who kept the secret that like myself, this would be her first Quarter to a Triples method) for helping ring a successful Quarter Peal at Kirtlington yesterday to commemorate  the tercentenary of our 3 oldest bells.

I had been intending to have a Quarter Peal rung with local ringers this year when I found out that the 3 oldest bells were cast in 1718. This also coincides with the first recorded Peal of Grandsire Triples rung in the same year. So when I  attended the Radley Course in April this year, the method had to be Grandsire Triples.

We completed the quarter despite a couple of “moments” where I tried to dodge off the wrong stroke,  but was guided back into the right place.

It was even appreciated by villagers and visitors to the afternoon service, such that 5 youngsters asked to see the bells after the service and to have a go. 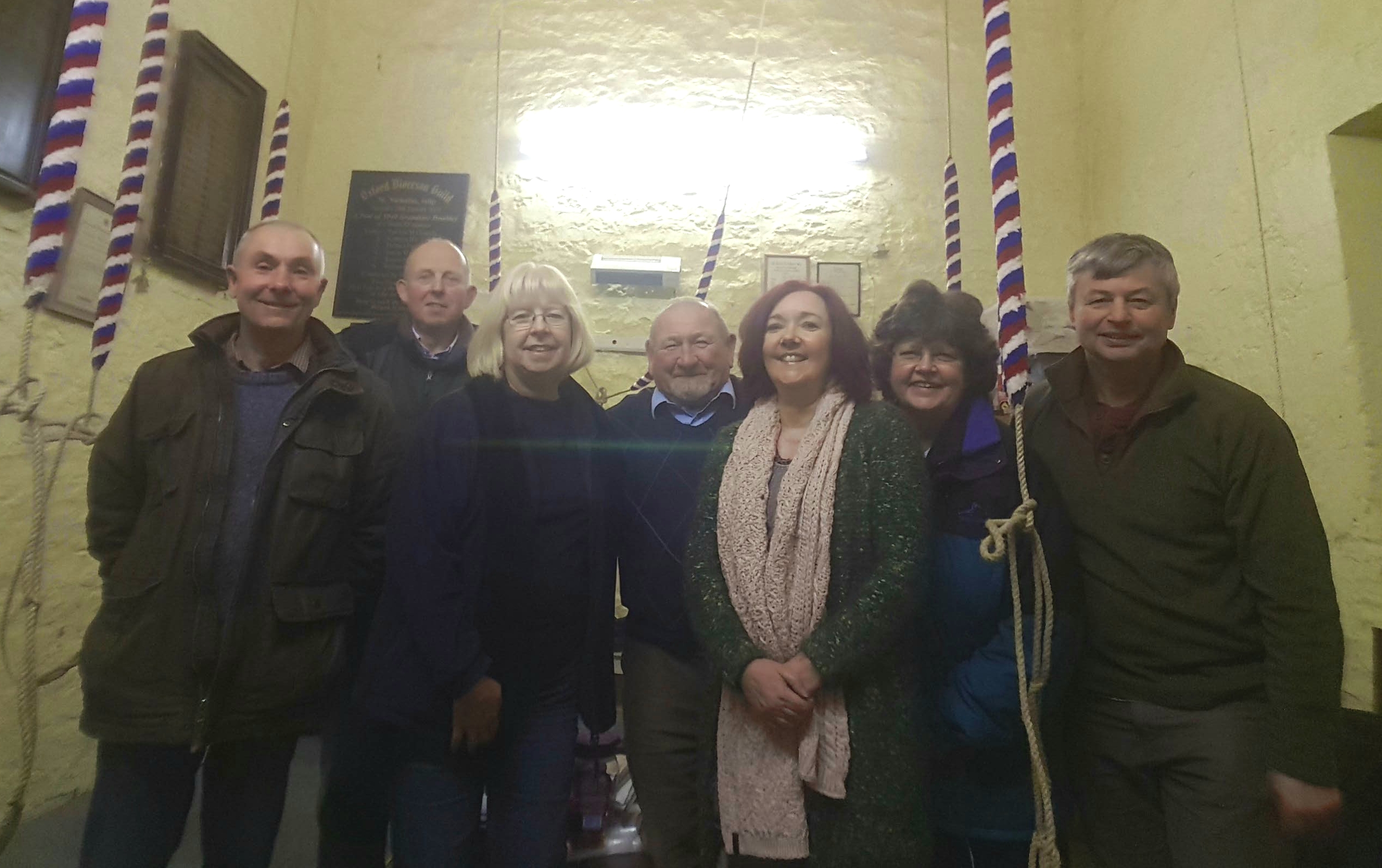 We rang at Islip where Willie had been ‘temporary’ Tower Captain from 1983-1993.  Apart from being President of the Bicester Branch, Willie has been a member of the Oxford Diocesan Guild of Church Bell Ringers since 1951, as well as serving on many of its committees, and has been Tower Captain at Charlton-on-Otmoor for an impressive number of years.

Willie appeared to be very pleased with the team’s efforts, as he bought everyone a drink at the Red Lion afterwards.

Today a quarter peal was rung in Islip – details below: